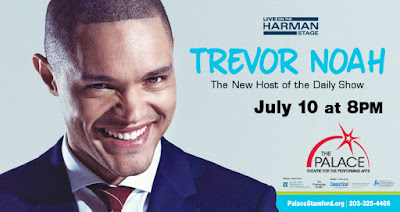 Don’t know the name? Well, come September, you will. His charm, wit, and lilting accent have already won the heart of Jon Stewart. Come July 10, he will win 1500 more hearts as he comes to The Palace Theatre for one final stand-up comedy show before his career (and his star power) changes for the rest of his life when he takes over The Daily Show on September 28. At 31 years old, he will be the youngest evening talk show host on air, and will start his late-night talk-show career at an earlier age than any other host currently on air.

Born in Johannesburg, South Africa, during Apartheid, Trevor’s Black and Jewish South African Mother and White Swiss Father got married and had him illegally. Eventually forced to split, Noah grew up with his mother and grandmother. His mother remarried and had two more children. This stepfather, a Black South African, abused Trevor’s mother and eventually threatened to kill Trevor himself. The stepfather was eventually arrested and convicted. Trevor often uses his story as a platform to raise awareness for domestic violence. 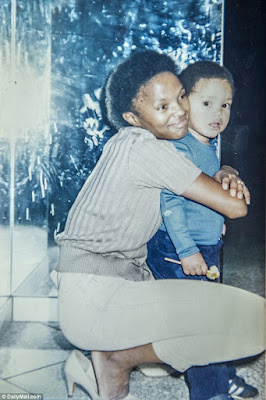 Trevor with his mother.

At the age of 18, Trevor’s career quickly blossomed, first starring in the South African Soap Opera Isidingo (while we couldn't find a clip of Noah in it, here is a taste of the show to get an idea), then going on to host radio shows, reality competitions, and various South African Award Shows. All the while, he practiced and developed his comedy routine, performing with many famous South African comedians and opening for Gabriel Iglesias, who has also performed at The Palace.

He then brought his comedy act to the United States, being the first South African to perform on The Tonight Show and on The David Letterman Show, where he showed off his comedy and language skills (he is fluent in six languages, and is developing his German and Xhosa). This landed him the starring role in the documentary You Laugh But It’s True, which focused on the struggles of being a rising comedian. After this and being the Roastmaster of Comedy central’s Roast of Steve Hofmeyr, Trevor sealed his destiny and clinched a job as a correspondent on Jon Stewart’s The Daily Show.

As a correspondent, Trevor has appeared three times. In his debut, in a section titled “Spot the Africa,” where he asked Jon Stewart to compare photos, asking him which one was taken in African versus taken in the United States. Jon lost every round, showing that Africa is just as diverse in socioeconomic status, racial issues, and technological savvy as the US. His then came back, in a segment called “Boko Haram in Nigeria.” Noah then pointed out the countless tragedies that happen in Africa every day, and how they often go unrecognized. Finally, via a game of Chess, Noah and Stewart talk about how America often uses its monetary to buy their way to success in the segment "Chess News Roundup." Each appearance more exciting than the other, Noah’s unique point of view caught the attention of Jon Stewart and the rest of the country. 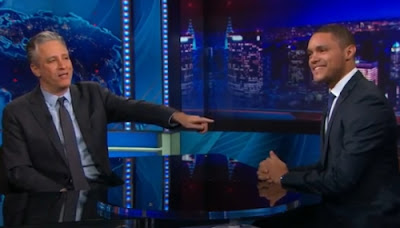 Trevor, during his first appearance on the Daily Show.

Trevor’s life, already so riveting, is about to reach its most exciting chapter to date. Come see him as he does his last stand up work before his Daily Show tenure begins.


(Note: Daily Show tickets may be free, but are almost impossible to get. Just saying, it’s much easier to come to this show at The Palace, and it will be just as funny.)

Posted by Palace Stamford at 3:45 PM